Industries and manufacturing sectors all need one thing: electrical power. The demand for energy will continue to increase with the rise of highly networked Industry 4.0. However, the increase in demand now envisioned coincides with the energy transition, which means the share of renewable electricity feeding the grid is expanding – and impairing the reliability of the supply in the process. Why is that? Because solar energy depends on daylight and varies with the time of day, and wind is variable as well. Unlike conventional power plants, renewable electricity cannot be adjusted to the actual demand without special measures. Problems especially arise during peak load. That scenario is leading more and more medium-sized companies to consider the acquisition of stationary energy storage systems that ensure the availability of electricity. The systems produced by Commeo GmbH are good examples. Based near the northern German city of Osnabrück, Commeo recently began incorporating high-performance, long-lasting battery cells from XALT Energy, a Freudenberg Group company, in its solutions.

In seven years, Commeo Managing Director Michael Schnakenberg has taken his company from a startup to an ambitious medium-sized company, relying on strategic partnerships like those with XALT Energy and Rittal, the European leader in electric enclosures. These racks are the framework in which Commeo installs the modules that contain battery cells and integrates its own control and safety units. The collaboration with Rittal provides Commeo with access to more markets for its products while creating a unique storage system platform for manufacturing and other industrial sectors. Commeo is also focused on setting industrial standards with quality products. “In a few years, we want to be the leading company for stationary industrial storage systems in Europe,” Schnakenberg said. The systems operate safely enough to allow them to be positioned in the middle of manufacturing spaces or even in public places. There is no requirement for special battery rooms.

In March, for the first time, Commeo delivered stationary battery systems whose modules contained high-performance battery pouch cells from XALT Energy. The installation of its battery cells in stationary systems is a new development for XALT Energy; its cells were conceived for heavy transport, including buses, trucks and ships. The request from Commeo came as a surprise; still, a partnership developed quickly. There were some obvious advantages for XALT Energy: “Commeo accepted our pouch cells without any changes. That means we did not need to interfere with either our development or manufacturing processes. By increasing our production volume we improved our competitiveness in our core markets though,” said Felix Nelius, Director, Sales & Application Engineering at XALT Energy. Thanks to the collaboration, XALT Energy also gained a new market for its battery cells.

Commeo incorporates two different types of XALT Energy cells into its systems, according to Nelius. ”For one thing, high-capacity energy cells conceived for low charging and discharging rates. For another, power cells that are designed for considerably more charging and discharging cycles and can achieve high charging and discharging rates.” But who actually needs stationary storage systems? The first Commeo systems using XALT Energy pouch cells were delivered to large gardening center that illuminates its vegetables around the clock. That accelerates their growth and leads to an earlier harvest. If a company operates continuously in the era of the energy transformation, the need for a stationary storage is likely self-evident anyway. There will also be customers who deal in fresh produce and depend on reliable cold-temperature supply chains. The energy management of production lines requiring a great deal of automation and the use of robots can also be improved with stationary battery storage systems.

Two areas of applications for stationary electricity storage systems can already be derived from these examples: First of all, uninterrupted energy supplies during power failures. Second, the buffering of peak current during normal operation. Commeo can respond to either scenario with a single, specially designed energy storage system. In one example, electricity flows into manufacturing operations in the event of power fluctuations or even failures. And thanks to peak shaving, extreme surges in electrical consumption are ruled out.

That is important because power providers compute their service charges in part based on highest load peak of the prior 12 months. If you can eliminate the outliers, you can save real money. With a source of current such as a photovoltaic system on its periphery, a company‘s CO2 footprint can be reduced even further, and the goal of CO2-neutral production can be reached more quickly.

There is a third area of application for storage systems: as a power supply for electric-vehicle charging stations. Two categories of customers have recently expressed interest in this area. “Demand is especially growing for parking structures and underground garages, along with hotel parking areas,” Schnakenberg said. Until now, hotels’ demand for power has been geared to classic hotel operations. There has never been a need for the simultaneous charging of the electric batteries in multiple automobiles. That is now changing with the transformation in mobility now underway.

WITH BATTERY CELLS LIKE THOSE FROM XALT ENERGY, WE ARE DETERMINING WHERE TO SET THE BAR.

The Right Solutions for Medium-Sized Companies

Commeo’s solutions are geared to medium-sized companies. Providers are already offering container solutions suitable for large energy storage farms with a capacity of more than 2.5 MWh, and there‘s no shortage of options for households. But there has been a lack of a reliable industrial standard for mid-tier companies. That makes them complicated as a whole. 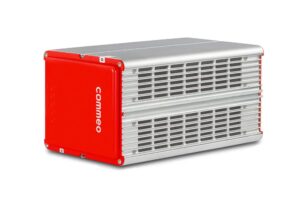 “We are closing the gap,” said Schnakenberg, Commeo’s founder. “We are defining the industrial standard that has been absent until now. With battery cells like those from XALT Energy, we are determining where to set the bar.”

To set an industrial standard, it was essential for Commeo to identify the situations where medium-sized companies derive the most advantages from stationary storage systems. So Commeo had to understand the market or, more precisely, the Renewable Energy Law (EEG) that regulates the supply of alternative energy into Germany’s grid. Schnakenberg‘s experts examined and evaluated the areas of application for which the EEG envisioned energy storage systems.

The focus was on two types: those that are in daily operation and those that respond to unexpected events. Performance is important in both cases: how quickly the energy is fed into the storage system and how quickly it comes out again. This is represented by the so-called C-rate. Commeo has succeeded in giving systems like those using XALT Energy battery cells double the performance of its competitors’ solutions, which corresponds to a C-rate greater than 2 – and that is true until the battery is drained, not just over a few seconds as is the case with other providers. With the help of stationary energy storage systems, customers keep production running in critical situations.

They are required to buy fewer systems and thus can limit the investment costs thanks to the performance of the Commeo systems and their modular design, which make it possible to size systems to the customers’ exact needs. “Our solutions are generally amortized over two- or two-and-one-half years of use,” Schnakenberg added.

In the end, Commeo offers everything from a single source. With its industrial platform, Commeo is able to create more than 400 storage-system variants using its modular approach, no matter how complex the requirements are. Using its database, customers can configure a solution appropriate to their needs. The two partners, XALT Energy and Commeo, are thus the perfect team to fill both kinds of gaps – those involving power-supply security that the energy transition has opened up – and those involving the stationary storage needs of medium-sized companies that have been neglected until now.