by Elaine Arnold in Mentions in the News. Posted January 3, 2019

Chevrolet’s eCOPO Camaro Concept offers a vision of how electric powertrains could slot into the vibrant OE performance parts market.

“Formula E’s cool, but this [drag racing] is the perfect opportunity to do fast learning on battery technology. The 32kWh in our battery pack is a perfect number: you can do three runs without charging, or do a fast recharge in-between and run all weekend,” says Russ O’Blenes, GM’s director of performance variants, parts and motorsport.

“What else is interesting is that although you would have to make a big initial investment, there’s almost no maintenance,” continues O’Blenes. “The electric motors are designed to run forever, and the battery life would be very long, given how a race car cycle would be. Racers in the Comp or Stock classes are [already] spending US$60,000-80,000 on a motor that will make 50 passes before it needs rebuilding. People just don’t want to add up how much we spend on racing – we’re all in denial!” 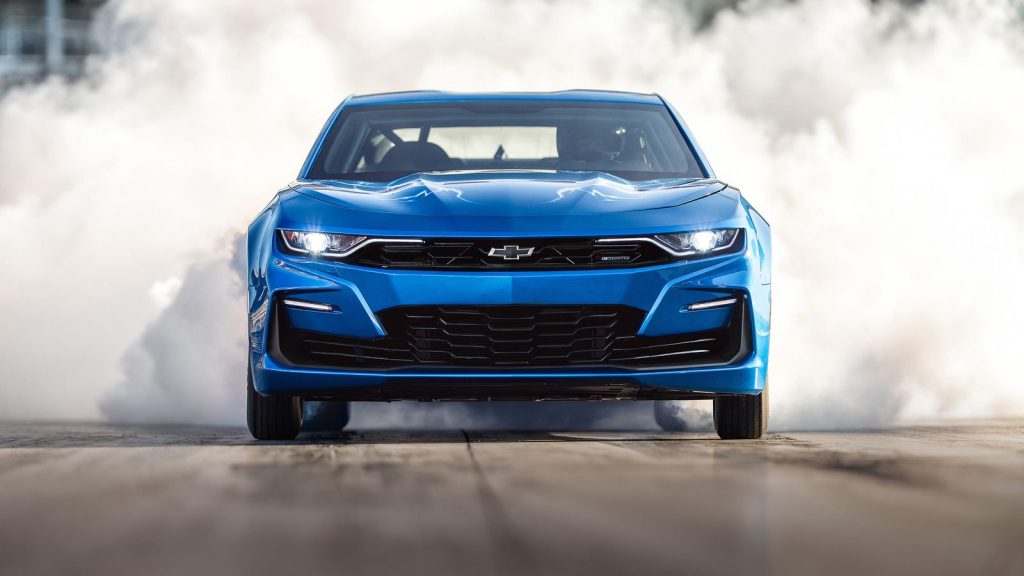 GM hatched a plan to draw on the experience of its own engineers, as well as McCue, Hancock & Lane, and other outside partners, to create a concept electric drag racer for the 2018 SEMA Show. The result – built and owned by the McCue/H&L team – is the eCOPO Camaro Concept, which marries a dual-motor stack and a four-module Li-ion battery pack to a conventional drag-race transmission and driveline in a regular COPO rolling chassis. COPO stands for Central Office Production Order; Chevrolet has offered 69 of the special-order performance Camaros for sale each year since 1969.

“I’m not saying it’s happening tomorrow, but I wanted to get ahead of the game,” says O’Blenes. “Crate engines are our bread and butter, so we had that mindset from the beginning. What’s neat is that everything has a modular design. The eCOPO package has two motors in it, but you can build it with one, two or three, for 350, 700 or 1,050bhp [355, 710 or 1,065ps]. It gives flexibility for how we might do stuff in the future.”

Design and construction of the battery pack was a major challenge for the four-and-a-half-month eCOPO program. The pack is split into four, with two modules in the back seat (one either side of the driveshaft) and two in the trunk. Each module contains 48 XALT Energy pouch power cells for around 1,400A at full power. Like the motors, the pack’s modular design would enable the pack to be scaled to different vehicles.

“The main simulation we did for eCOPO was on the battery,” says O’Blenes. “Unfortunately, when you get into these types of  discharge rates, the cell choices are pretty small. Availability is even more of a challenge. It seems that everybody’s making energy cells, but no one’s making power cells! These were literally the last 225 cells [of their type] in the world and it was a struggle to get them.”

The team turned to GM’s internal resources for cell choices and for sign-off on system safety: “It was critical that we had good oversight of how the contactor worked, the e-stops and electrical isolation,” he adds. Starting with a battery box design from EV hot rod pioneer, Bloodshed Motors,the integration of cells and BMS was a joint effort by GM, McCue/H&L and Hybrid Design Services in Troy, Michigan, which has been a Tier 2 for GM through LG and had experience in the motorsport niche. O’Blenes notes that without the input of the various external partners, the project would not have been completed so quickly.

Each module contains 48 pouch cells and an integrated BMS to monitor cell voltages and temperatures. In turn, each BMS is connected via CAN to a ‘watchdog’ that monitors the BMSs, motors and inverters to ensure safety of the overall electrical system.

The four modules supply 200V each and are connected in series to give 800V, more than twice the voltage of the production Volt and Bolt battery packs. The arrangement is said to support more efficient power transfer to the electric motors and faster recharging, which is important for the limited time between elimination rounds in drag racing. Each pack has its own fuse, plus a main fuse in the custom-designed contactor box.

GM hasn’t measured the range that the 1P pack arrangement would offer, but O’Blenes envisions offering other pack options for use in street car applications such as restomod EV conversions. “People who take their cars to a cruise night wouldn’t need this much power, so you could throttle back and do a 2P pack, or put some energy cells in it,” he muses. “How cool would it be to show up in a ’70 Chevelle, lift up the trunk… people would be blown away!”